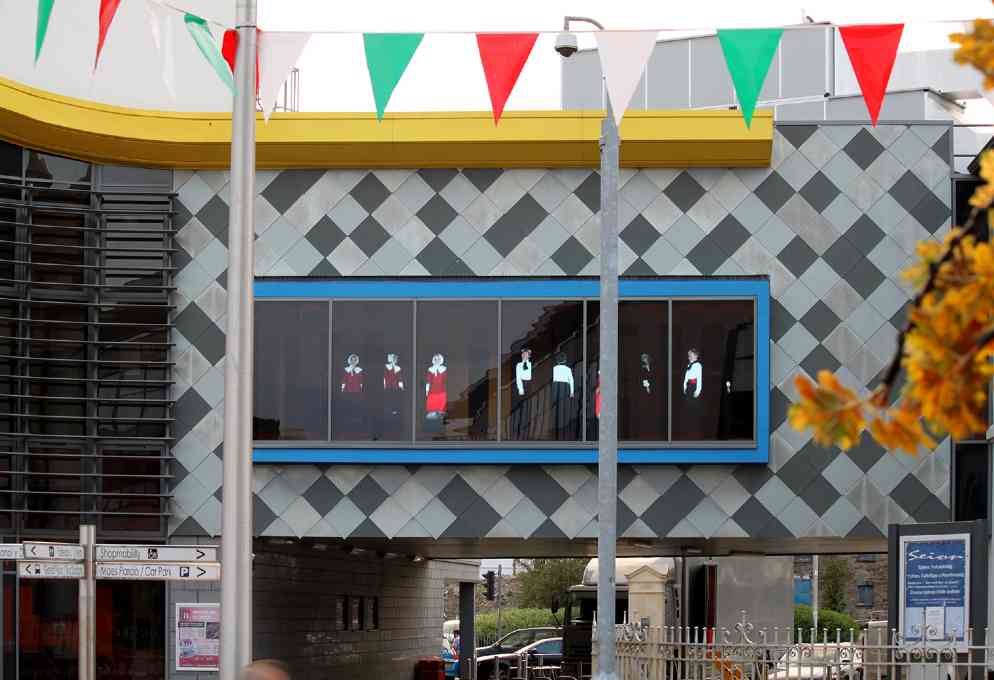 At the centre of Llanelli’s East Gate cultural quarter is Ffwrnes Theatr, a creative and cultural centre for performing arts, media and community events. The London based art and architecture practice Studio Of Cinematic Architecture (SOCA), was commissioned by Studio Response to create an embedded digital artwork for a public facing panoramic windows of Fwrnes Theatr.

The Digital Window is a permanent canvas for artists and filmmakers to showcase moving image works in the public realm. Twelve moveable strips of video occupy a panoramic window in the Y Ffwrnes Theatre in Llanelli town centre. Digital images are superimposed with views in and out of the  theatre, to activate the public space below. The canvas will display specially commissioned content every 6 months.

The first commission, 'Audience', is a site-specific interactive artwork that explores the relationship between audience and performer. A crowd of virtual characters appear in the window, according to real activity below. The more activity below, the larger the audience in the window. The characters can be viewed as performers or as an audience watching everyday performances below. The studio worked with the local community and filmmaker Tom Gripper to create the characters, filming participants in the theatre’s Stepni Studio. The groups who took part include Ysgol Heol Goffa, Ysgol Dewi Sant, Coleg Sir Gar, SA15 Stage School, Y Ffwrnes staff and visitors. Hardware and Software by Showave. Fabrication and assembly by Frozen Fish.