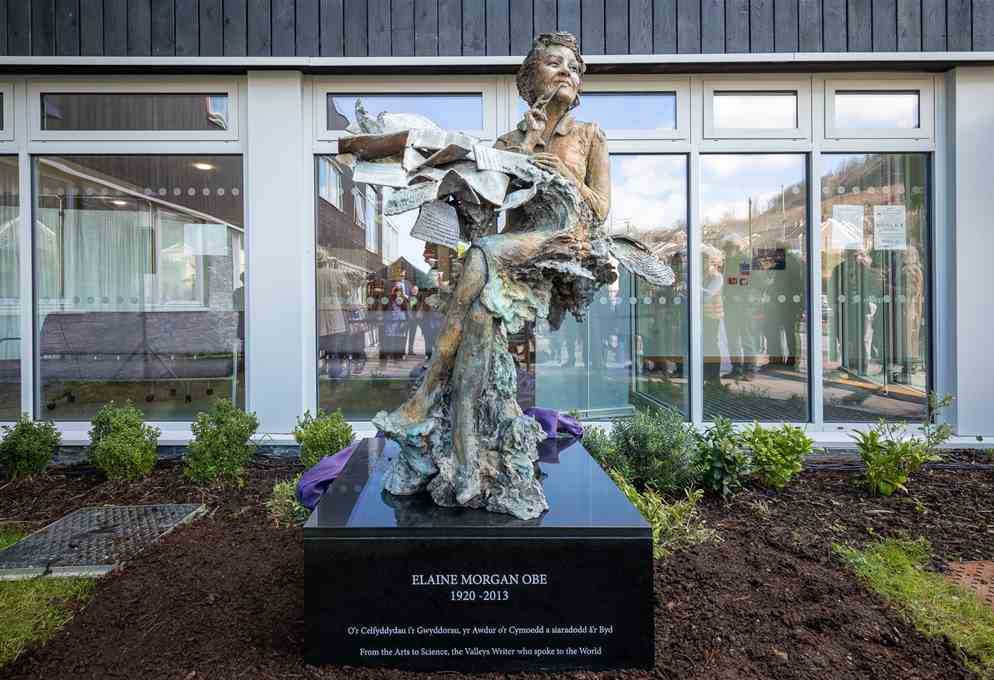 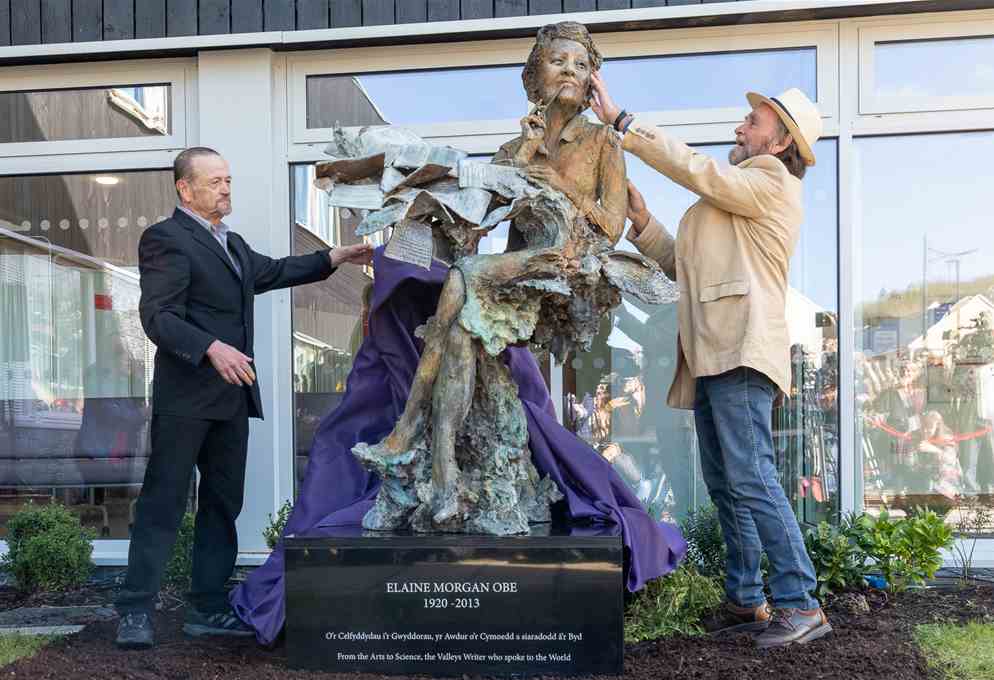 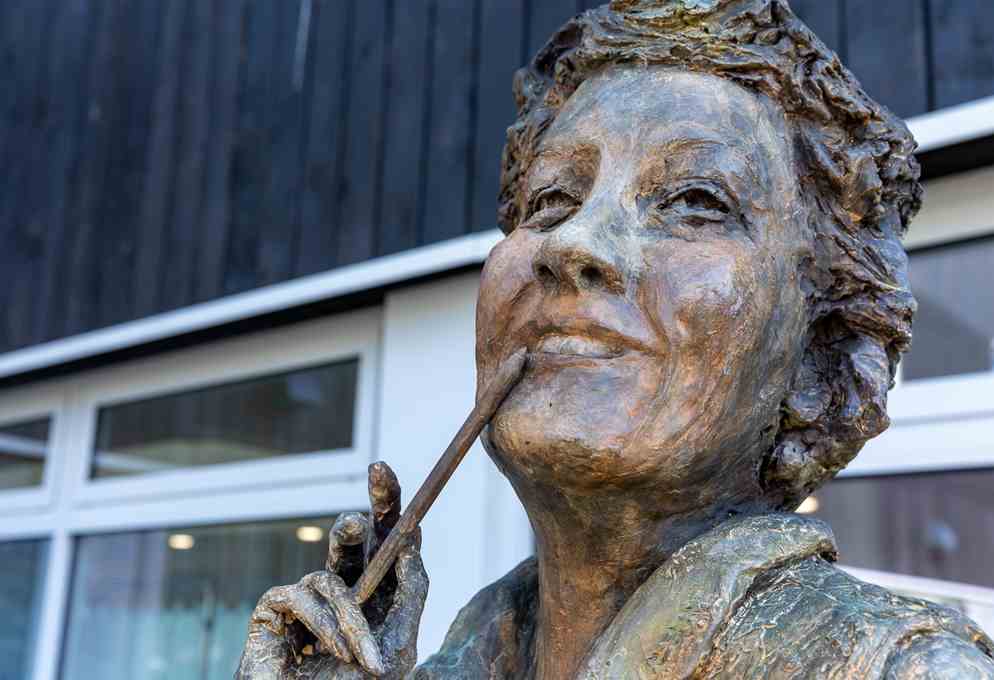 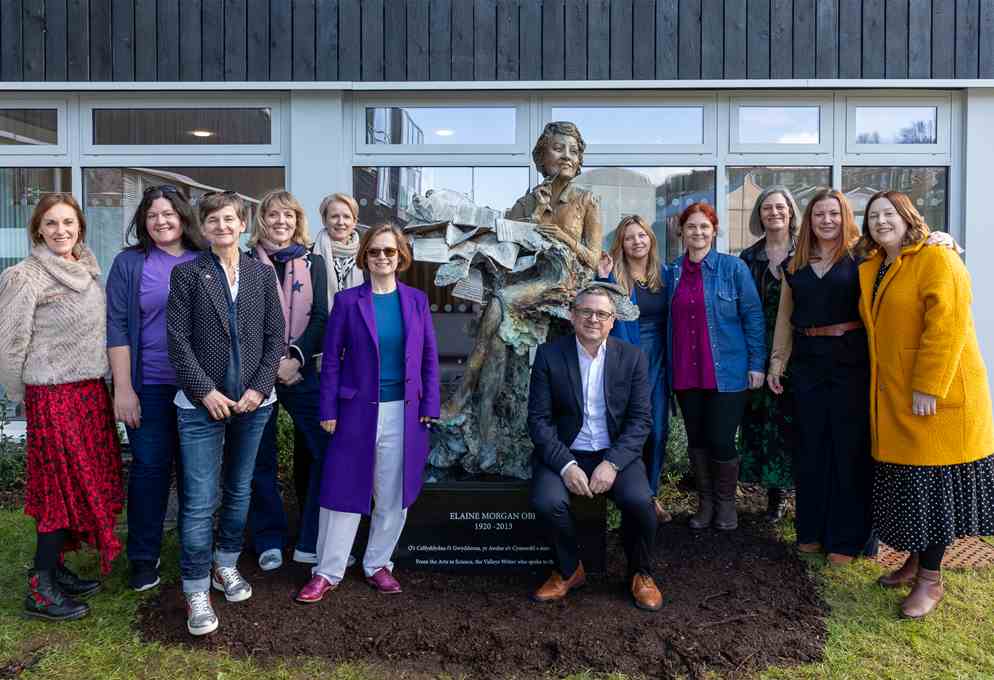 Studio Response has commissioned the statue of Elaine Morgan, the second statue of a named, non-fictionalised, Welsh woman in Wales.  It follows the successful unveiling of the Betty Campbell Monument in Cardiff in 2021.

Designed and created by renowned sculptor Emma Rodgers, the statue, a permanent immortalisation in bronze of the pioneering writer, evolutionary theorist and trailblazing feminist, was unveiled in an inspiring and moving ceremony outside the Meddygfa Glan Cynon Surgery in Mountain Ash on 18th March 2022. Watch the following short film to share in the unveiling and celebrations:

The sculpture was commissioned following the Hidden Heroines campaign organised by Monumental Welsh Women and broadcast on BBC Wales in January 2019.  The other women on the shortlist were Margaret Haig Thomas (Lady Rhondda), Elizabeth Andrews, Sarah Jane Rees (Cranogwen) and Betty Campbell, who became the first woman on the list to be honoured with a statue.

Elaine Morgan was born in Hopkinstown in 1920. Author, television dramatist and evolutionary theorist, a true Renaissance woman of Wales who excelled in both the arts and science. An award-winning scriptwriter she helped create some of the seminal dramas of the 60s, 70s and 80s, from Testament of Youth to The Life and Times of Lloyd George. She brought equality to evolutionary theory with her pioneering book The Descent of Woman – which become a key text in the Women’s liberation movement and saw her feted by the major American feminist thinkers of the day. Elaine’s advocacy of the Aquatic Ape theory of evolution brought her global recognition. At the age of 89 the Ted Talk she gave on evolutionary theory attracted more than a million viewers.

“I know Elaine would have been delighted with the work of the Monumental Welsh Women statue campaign, not for the recognition of her own achievements but in celebrating the lives of the many extraordinary women that Wales has produced.

Elaine’s work has helped to inspire women everywhere and I have seen messages to her from women all over the world who wrote to thank her for changing their lives.  Some had been inspired to forge a career in science, while others took up writing or some other long held ambition after reading her books, and they all expressed how she had changed their view of women, of science and of themselves.”

Find out more about Elaine Morgan and the Monumental Welsh Women statue campaign by watching this short film:

Monumental Welsh Women is a not-for-profit organisation dedicated to recognising the contribution of women to the history and life of Wales. Its mission is to normalise female ambition and success by celebrating the achievements of great Welsh women and inspiring the next generation of great Welsh women.

The group has set itself the challenge of seeing all five of the women shortlisted for the Hidden Heroines campaign – Betty Campbell, Elizabeth Andrews, Cranogwen, Lady Rhondda, Elaine Morgan - immortalised as statues at different locations around Wales in five years.

Studio Response has commissioned both the Elaine Morgan statue and the Betty Campbell Monument on behalf of Monumental Welsh Women and is continuing to work with the group on the commissioning of the three remaining statues.

The statue of Elaine Morgan has been made possible thanks to the support of Monumental Welsh Women’s funders and partners and generous donations by members of the public.  We are extremely grateful to Cwm Taf Morgannwg University Health Board who have granted permissions for Elain Morgan’s statue to be sited at Meddygfa Glan Cynon Surgery.

Emma Rodgers worked with Castle Fine Art Foundry on the fabrication of the statue.